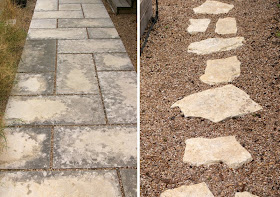 In the Japanese gardening style, there is a ranking system known as "shin-gyo-so" which basically correlates to formal, semiformal and informal. According to the book Japanese Garden Design, by Marc P. Keane, "shin" is used to reference things that are highly controlled or shaped by man. It implies cleanliness and sparseness. The opposite would be "so," where materials are left in their natural state. "Gyo" is a mixture of the two ideas.

We happen to have several examples of the concept at play in our garden paths.

Here on the back patio is an example where the limestone is "shin" and the design is also "shin." Everything is very cut and placed with purpose. 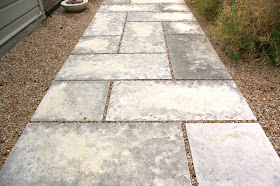 In the following path, the limestone is left in its natural state ("so") and the arrangement of the stones is also very natural, thus also "so." 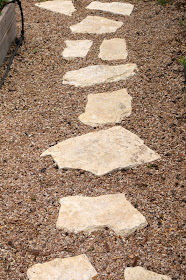 Here is a case where the "shin/shin" garden path meets with the "so/so" path, a very interesting dynamic. 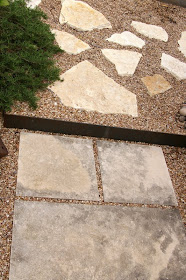 The front path below uses "shin" limestone blocks, but the design is a bit more "so" in a random way. This one is a bit harder for me to categorize, but I think that fits. 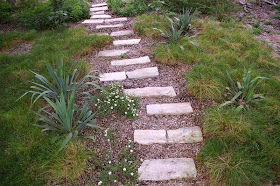 We don't have any examples of "gyo" here, where controlled objects are used in conjunction with natural ones. Do you?
Share